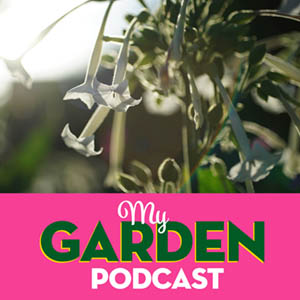 Abandon all hope and nicotiana - My Garden Podcast

Abandon all hope and nicotiana - My Garden Podcast transcript

Oh, that's pleasing, it's a big butterfly. I'm going to say it's a red admiral and sound knowledgeable but I've no idea. It's got red bits on it and white. It's making love to the verbena, the purple verbena flower top which is it's raison d'etre in my garden, to attract butterflies and bees.

Oh, and there's another one over there. It's just flown off. Ah, the work is working. Right, gloves are on and the rose secateurs are in one's hand. All I'm doing really is just deadheading and pottering because it's the end of the summer.

I say that, but it's mid-September, and it's gone boiling. So I've got my shorts on, got my gloves. I've got big Cosmos, and next to them, well I can only say it's the naughty nicotiana which I've mentioned in a few of the previous episodes because they've perplexed me somewhat.

Yeah, so seeds, I bought a packet of seeds for nicotiana. I like them. I like the look of the big weird kind of trumpets that stick out. Look them up, they are quite curious, they look really dazzling at night time.

I think that's the great thing about a white flower in the summer, or as it's getting into the gloaming. I do like that word. Dusk, basically to you and me. So they kind of light up the garden which as we know is really good when you're deadheading at 10 o'clock at night in the middle of the summer.

Oh, another butterfly, the world has gone mad. Oh, super.

So, these nicotianas, I grew them from seed.

They were really slow to get off the ground. They weren't germinating for a month basically. Then they started popping up and then they were like these tiny thready weedy pathetic looking specimens.

I thought this is just a boring-ache. I was going to say something else, this is just painful. They are never gonna come too much. On the packet, it said something like will get very big. The span will be 60 centimetres (23 inches). The height will be a metre and a half (5 feet).

I looked at his tiny pathetic puny seedlings and thought no way that is ever gonna happen. I've been lied to. Such is my scepticism.

Anyway, I didn't pay too much attention to that, and I put quite a lot off them into the ground thinking well okay when they appear I'll just move some of them and thin them out.

But when they did start appearing, I realised that the leaves are disgusting. When you touch them, they smell.
They're sticky, they're tacky, they stick to your clothes.
They are difficult to move. The stem is kind of furry but also quite sticky and tacky at the same time. So I didn't bother moving them.

Then I got advice that if you're trying to get the flowers to come out in a plant that's a bit slow then use Tomorite. It's traditionally a tomato feed. Used a bit of Tomorite, use a bit of Miracle Grow. Just pour some stuff on them to get them going.

Anyway, what I've ended up with it's like Day of the Triffids. This one I'm stood next to, I'm five-feet-two, so I reckon it is five-foot-five or five-foot-six feet tall.

I'm looking up at its big head of white flowers they've dominated this whole bed.

A huge nicotiana, which are amazing!

Having been a hater of nicotiana in the early days, I now think they are well worth it. It's a happy accident. I've been quite impatient with them, I've been quite rude about them.

So, nicotiana is my new friend. I'm gonna go for it next year. What I like about this if we just step back a bit is this is planted in the Jasper memorial bed which is opposite the summerhouse door. So you sit in the summerhouse in the evening with a bottle of wine or a cup of tea and you look out of this bed. The reason I put it in here was because otherwise we just looked out a hedge.

So I made this bed earlier this year. You may remember me talking about it in the Jasper memorial bed episode. Jaspers the R.I.P. cat which lies at the bottom of that bed. I do think of him often actually.

Oh, I'm going to set myself off! I thought my emotional days were behind me having changed the HRT recipe I was on! I feel a little happier. I feel a lot happier actually.

It was all going about horribly wrong at one point. You may remember a few slightly angry podcasts where I raged and ranted. Looking back it wasn't quite me for many months...