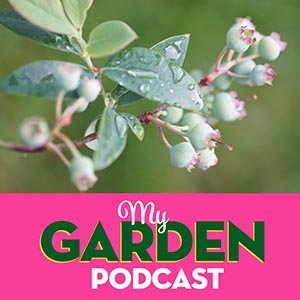 Blueberry, it's complicated! - My Garden podcast

So if we just look at this grey pot with a blueberry plant in it. I am loving for the first time in several years this plant has a million blueberries on it.

It's wonderful, a little green at the moment, I'm not going to try to eat one, but they are fattening up and getting more purple.

Now, the history of this relationship is that it's been a little un-giving shall we say and I've repotted this blueberry plant several times. I've been quite intrigued that its roots haven't really reached right down and filled the pot.

I thought for a while it was pot bound and needed to go into a bigger pot but I just picked it up and the roots were barely forming. I changed the soil and it needs a soil called ericaceous. I think rhododendron, azaleas and Chameleons need that certain soil. I'm not sure what else does but blueberries need ericaceous soils.

I got a bag that I've been using since I got it. But this year it's really grown and blueberries are arriving, that's wonderful.

But, having done a bit of an internet search on what blueberry plants should look like, it should not look like this! I got excited that it was growing really tall and I thought, oh it's going to be a wonderful tree because I'm a naive inexpert amateur gardener.

Apparently, you don't get blueberry trees in the same way you might get an apple tree. You get blueberry bushes which of course makes perfect sense now but I'm a bit dim sometimes.

So I'm gonna cut back the long legs to stop it spending all of its time shooting up to the sky. That way it can put more of its energy putting into the fruit. Hopefully, the birds won't eat the fruits before I get to them.

I might have to net around it in a professional sort of style. We'll do that another day because I can't be bothered right now.

Okay, just need some secateurs to take the whips off and make it look a bit more like a bush and yes pay more attention next time to the label.

Good secateurs these, it's pleasing when you have a sharp item. I've got some loppers in the shed, they are really sharp. I don't need loppers for this job.

Now, I've got one main stork if you like. It's not a trunk it's a stork and Joey has tried to eat it. I don't think it needs all this so I think I'll just cut it halfway. There we go, so it's more in line with the rest of the stalks with the fruit on. Actually, I even think that's too tall. Gonna be brave, I'll go below the bet where Joey has eaten the stick of it. He's so naughty like that you turn your back for a minute and then Joey's just eating a living plant.

Right down the bottom as well, we've got some unnecessary side shoots coming out which means if they are left to long they'll cover the light getting through to the rest of the plant.

And again inside we've got stalks and stems growing towards each other clashing almost, so we don't need that. What I'm gonna do is just tidy up this longest stalk that's got blueberries on the end and see what happens.

This is all about having a go, isn't it? Have-a-go Haslam. Now, I'm not gonna go too mad because I might live to regret that and we'll end up with the difficult and complicated relationship that we started with.

There we go! That's much better. Much more rounded shape, a bit more coherent.

Mmm, I'm confused by this plant but I'm going to go with it because it's gonna yield some nice blueberries. But you shouldn't stay a relationship that is unfulfilling, complicated, confusing. It just wears you out!

So, I've always given this bush another year. Maybe I'm gonna get to its final year this year. That's it if it doesn't do what I need it to do it's out. You shouldn't have those kinds of things in your life, should you?

How to glow blueberries in pots and containers.