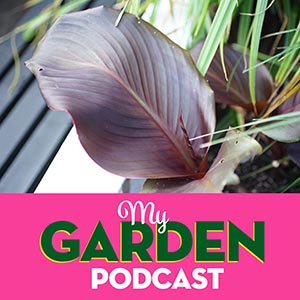 Canna get a witness - My Garden Podcast

Canna get a witness - My Garden Podcast transcript

Oh, my goodness! Cannas are funny. In fact, whenever I think of them I think of that song, Canna get a witness.
I think you meant to bring them inside over the winter but I haven't had an inside, apart from the house.

So I just kind of left them outside and they kind of melt away to nothing like little stumps and then they get this spurt on in about May, June. If you water them enough, which I found out is really important.

Um, and they just unravel every day they get this kind of like a little telescopic tube of leaf growing out of it, and then they just unravel into these cones of burgundy, glossy leaves apart from that one that's been eaten by snails clearly.

It's got a raggedy edge. But yeah, they are stunning they're burgundy and then, ideally, what happens towards the end of the summer is that they sprout these fantastic orange flowers.

It's quite a contradiction of colour, but glorious. I can't wait for that. But then, you know, you shouldn't wish your life away, should you?

Well, this one actually, it's half gorgeous, half sorry for itself. I think a snail is living in that leaf.

Can you hear that? They are like fantastic cups of plastic. Have I got a mozi on the face?

This is a bed, it's a raised bed, its made of breeze blocks and then it's rendered with plaster. And then it's painted white, so it's got a Mediterranean sort of charm about it.

The kind of thing you might have in a Mediterranean restaurant. So, in this box, large box, is a palm tree, some grasses, the Canna and at the very back is a climbing rose.

She's gone crackers actually, this year. There's a bit of a medley of things. I want to drought-proof. Well, that sounds ground, doesn't it? I want to buy flowers, plants for the garden that can stand dry weather. Not only dry weather but also maybe some lazy watering options.

Here's my plan, some things need watering at the Rose and the Canna, but actually, the palm tree and the grasses need to be left alone. The palm tree has doubled in height since we got it. We live in the north-west of England. It's not exactly the balmiest of places, but I'm really pleased it's in a sheltered bed.

And this bed is actually built around an old tree stump because we couldn't be bothered or afford to get it ground down or get rid of it. It was sticky and hard as nails. So, we just built a big bed around it, filled it with soil and stuck some stuff in it. It's grown, amazing isn't it? Right moving on because I'm overwatering this now.

So here we've got a sunflower, which is about just over half a meter high. And it was the only sunflower seed that actually germinated out of about 10. Probably because the seed packet had gone off. So, I've been lucky with this one. They've only got a couple of years life in the seed, so, and also at the time, we couldn't get to shops to get any seeds because it was locked down. And we had to sort of have a go really.

I say we, just me. The kids used to be interested in stuff like growing sunflowers on the windowsill but they're not anymore now they are cool teenagers.

So, I love this sunflower because it is my sole survivor out of lockdown and it's growing. It really races. It gets to this time of year. May, June and it literally races to the sun. Every day is a growth spurt, and I think that's really satisfying.

I used to have a flat in London. A little garden and me and Daisy used to have sunflower races. In fact, my brother visited from Australia one year, and three of us planted out a sunflower so used to tell him how his sunflowers doing, whether he was winning the race and, not surprisingly, he came third. Actually, Daisy came first. I came second and they were magnificent that year.

I think we have giant Russians sunflowers. Heads like dinner plates, just glorious...

How to take care of Canna plants