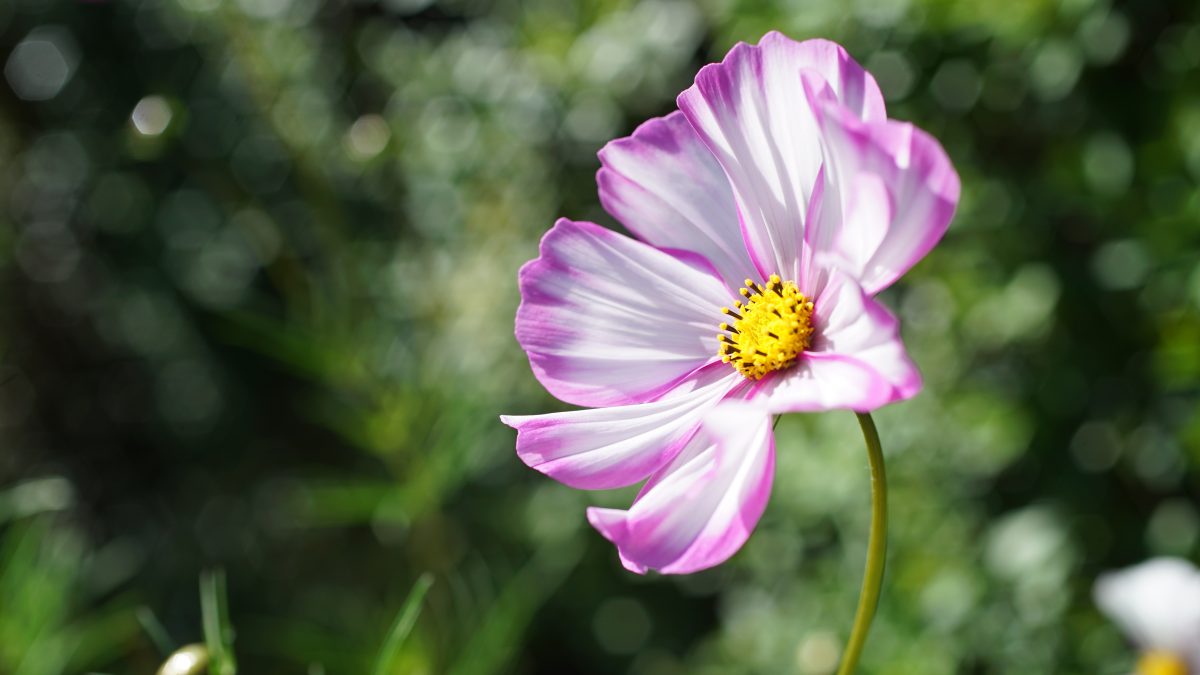 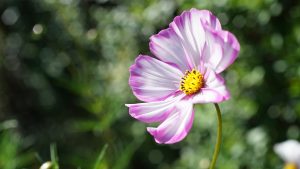 Gardening podcast cosmos - Lovely cosmos. Penny loves cosmos, so it's getting planted out again in a bed she's prepared with the no-dig technique.

So I've trundled down the garden with my wheelbarrow. It's got some compost in and the cosmos that has been grown from seed. It's looking really good. I know the root-ball is going to be healthy because we've got white roots peeping out of the bottom, nothing too serious and I'm going to put them into this bed.

There are absolute clouds of midges. Out the bedroom window last night there was a tower of them taller than the house, two of them flew by and looked like they were quite intimate.

So I'm in the Mediterranean sun terrace area. I'm gonna have to draw all this and put a sketch on social media just to show you where everything is.

This bed dries out because it's in full sun and it's a bit of a concern when you're putting something in it. It's got to be really able to withstand a week away when you don't get to water it or the drought times when you've got a big hot summer.

Last year I threw some cosmos in it from seed and they did really well.

Cosmos a brilliant, fluffy fronds to begin with. They grow quite tall.

They deliver on flowers all summer long, they really do, right through until the first frost. If you can get those started well inside and then plant them out, you're in for a really nice time. And they did really well here last time last year. And the brilliant thing is because they need so much deadheading when you're sitting having a cup of tea in the morning or at lunchtime. You glance at your cosmos and you know which ones need a quick deadheading while you were finishing your tea. Otherwise, it just gets forgotten about, doesn't it? Yes, it does.

The midges are not here. I'm gonna work quickly, and I've got a new favourite tool. I've overlooked this little thing. It's a trowel, nothing more.

Joey, what you doing? Joey's got his nose in a bush, he's particularly drawn to a shrub which is a variegated green and yellow thing that looks like a privet hedge. To be honest, I don't really like it, but he's always in there because I think a lot of snails on woodlice live in there. Always loving the action. He can see stuff wriggling around. Can you hear him rustling? Every now and again, he'll sort of snort out of his nose like a horse.

Anyway, my new favourite tool is a bit of a narrow trowel with a pointy end, and it's brilliant. I've overlooked it because it was just a bit small on puny. But no, it's really good for digging in pots. It's also got a measuring tool, otherwise known as a ruler!

So into the bed these cosmos are going to go. I'm going to do three because they really do beef up and offer up a lot of foliage, a lot of leaf.

We've got quite a lot of growth at the back of this bed which is threatening to take over. It's very pretty. Pretty purple flowers on it. It's a bit dominating, a bit of a concern. Let's get some of that away first.

I'm using the no-dig technique in my cosmos bed

Okay, Unbeknownst to you, listener, underneath the lovely soil on top of this bed, and I have put new topsoil in. Is a layer of cardboard. I kind of read a bit about the no-dig idea. It was a bit weedy, and I thought, I'll just cover it with a bit of cardboard. It's not a big space. I'll experiment and see what's what.

Yes, I can see the cardboard, but I'm digging through it really easily. So it's gone all nice and soft in all the rain we've been having, great. Looking very good and digging past it, it is weed-free. Weed-free soil that looks lush already.

Let's tip this cosmos out. Not as many roots as I'd like, but it is a big pot, so I'll not worry about that for now. You get in there, cosmos and it looks great. I'm very pleased.

I might have to start keeping cardboard and putting it down in beds around and about. I know those are I don't need the label. You know what cosmos looks like when they get going.

Two at the back of one of the front in a kind of triangle position and it's quite quick to go in the soil's lovely.

I holding it by its leaves, not by its root-ball. I've come on such a long way as a gardener since doing this podcast? It's all very well knowing stuff and doing stuff, instinctively or whatever? It's another thing to articulate it while you're doing it and sound slightly coherent like a reasonable human being.

I hope I'm achieving that, people tell me the podcast is very relaxing to listen to. Maybe it's because they're not actually paying attention to what I'm saying, and I wouldn't either, Really. To be honest, just listen to the birdsong, the occasional shouting at Joey.

Right, little one, in the back. Oh, yeah, bit two too deep on that one. There we go, right, I haven't made the mistake off either, burying them too low in the soil, so they are lower than the soil bed or indeed to high where they'd stand proud.

Trying cosmos and lupins together

I've also bought along with me some Lupin. I've got lots of them in the greenhouse. So I'm going to try is to plant two Lupin here at the front because they're gonna be shorter than the cosmos. Um, just to see what happened. See if they can live side by side in perfect harmony. I feel like Paul McCartney. And what's his name? Brilliant guy. Stevie Wonder. I feel like Paul McCartney and Stevie Wonder at the piano keyboard.

I got feedback from a listener this week somebody I work with. She talked about gardening and I went, Oh, you want to check out My Garden Podcast. It'll be of no use whatsoever to your plight of trying to learn how to do gardening. She said oh I will, I love a podcast. Lots of people are saying they love podcasts now.

Anyway, she said she found my podcast hilarious. I don't think it's meant to be hilarious, I think useful, relatable.

I did Lupin in London. In fact, cosmos and Lupin, when I had my flat in London, were my two mainstays. They were kind of reassuringly reliable at all times and provided lots of nice colourful flowers.

Lupin has always got a bit green fly-ridden. But, hey, I'm relaxed about that these days. We're not gonna worry too much about things like that, the birds and the bees can live a long and perfect harmony.

I'll deadhead the cosmos regularly to keep them flowering

There we go. Nice. So those are junior plants at the moment but I look forward to being out here in a few short weeks with my morning brew doing a bit of deadheading and looking at all the colours that they're going to present in this little corner.

How to grow cosmos