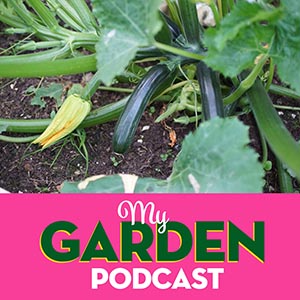 Wine and courgettes - My Garden Podcast

Joey? Can hear his tail wagging oh yeah fluffy mic. It's a fluffy boom, isn't it?

Yeah? Come on then shall we go and look around the garden?

Joey the springer spaniel is on the sofa looking at me like I'm an idiot. Like what the hell you doing? Why are you talking about that woman? Come on then, I think the candles will be alright in there for a minute.

Now, that noise is the door opening against the wisteria which is growing above it on the roof. So we're trying to soften the effect of the hover house, summerhouse for the neighbours really. And also to create a kind of shaded area above it. I'm gonna cut that back tomorrow I do like a bit of a trim. Hedges have been trimmed today. Steve, the husband has done that, that's marvellous.

And we are going to have a look at the garden because it's been progressing beautifully. I'm so excited we're going to transform our football pitch sized rectangle garden and divide it up a bit. So we've got some ideas about how we're going to do that.

Oh my God look at this it's amazing! Peas, I had a friend over the other day, socially distancing and we walked out in the garden. I was showing her some bits and she said, oh this is in the podcast isn't it? Yep.

She said you're growing sweet peas? I said no they're actual peas. It turns out that she's a massive gardener. I didn't know that. She's got two greenhouses. She keeps bees. I didn't know that about her. And then all of a sudden there we are, she's like courgette missus, pea meister.

So anyway, I picked her brains for a few ideas about things. About how to do things and when to get into your greenhouse. She's got two greenhouses! That's just professional, isn't it? That's just showing off!

The journey into gardening is really funny. We bought this house, it's a 1930's semi-detached. There's more garden than the house, which is great.

My initial gardening storage was a little red metal Ikea cabinet placed outside with small bags of compost in it and a trowel. And it wasn't until recently that got a shed. Now I feel like I'm really progressing. So, we're gonna be so grown up with a greenhouse.

It's a courgette plant.

Let me just count, let me show off, one, two, three, four, five six, seven. Hmm, maybe eight. Nine courgettes off one plant and I want to be out here tomorrow morning just to help that one that's really growing.

I might give it a pad or something, get a sleeping bag to lift it off, just to protect it. Do you have to go crazy for courgette one week? Start giving them away to people. Hi! How are you? Great, do you want a courgette? That's what people do, isn't it? They've got a glut of stuff.

Or maybe I wait and see whether I'm going to get some sort of prize courgette that I can enter into a show.

Anyway, it looks fabulous really doesn't it. I'm really pleased. I think the courgettes are gonna taste brilliant. A bit like my sister in law's cherry tomatoes that she gifted to us this week which we've just eaten in the salad.

Oh my God, they were so lovely. I mean if you grow your own tomatoes in the garden, I'm guessing that you're going to be revelling that delightful taste. Such tasty, juicy sweet, gorgeous things.

You may or may not know but my journey into tomato growing has been particularly challenged. It's been rocky. I can describe it is rocky and so for someone else to be gifting me tomatoes knowing full well that the Alicante version that I was trying so hard to achieve on the window cill of my kitchen with 49 seedling plants, none of which happened. Then trot up with cherry tomatoes that taste delicious.

I'm trying not to read it as a slight and she knows full well of my challenges! Because I actually gave her one of the seedling plans and went, here you go, I've got 49 I'm gifting them to people. Isn't it going to be marvellous having your own Alicante small tomatoes available to you?

Oh yeah, none of them has worked. Even the two I've got left that Delia helped with, my mum helped with a couple of podcast episodes ago in the Tomato Emergency episode have come to fruition. So I just think it's one-upmanship...

How to grow courgettes