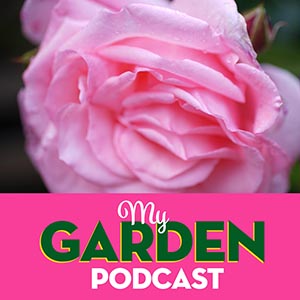 The greenfly gang - My Garden Podcast

I'm just with my rose. I don't if it's a rambling rose or climbing rose, I can't quite remember.

I think it's a climber. It's doing a pretty good job of climbing. I just thought I'd pop over for a quick deadhead because they're some of these pink blooms of really come on in the last few weeks.

We're into middle June now, and it started flowering about three weeks ago. Of course, once a rose dies back, you want to get that head off for the plant to use its energy elsewhere basically.

And you know, at a glance you can just think it's that job. I'll just nip across and deadhead those two deadheads on the rose bush. But no, you get closer and you realise there's a little bit more to it.

What I found on this new bud, which is really typical, is a whole gang of greenfly, literally covered.

Now, I'm not a big fan of sprays and chemicals, but, you know, this looks like it might just get a bit out of control. My mom, she just likes to squidge them, drag them off, and then hopefully the ants will do the work, but I'm not convinced it'll work. And actually the bushes so big the roses really climbing now.

A bit of a squirt of something might just tell the greenfly to shove off. All right, I've used it a few times and, do you know what, it smells really nice. Maybe shouldn't get too addicted to the smell of this chemical. It is a pesticide and it kills aphids, controls fungus, prevents further attacks. Sounds like a great thing.

I didn't know roses could get rust. Well, I'm learning all the time you see. It's a beautiful thing about gardening. You pay attention, you learn. Right? I'm 5 ft 2 the rose is taller than me. I'm gonna spray with my eyes shut.

Aim, Fire! it floats back down to me, which isn't appealing. I mean I'm only targeting new growth. New buds. Because that's what the fly like, isn't it?

The greenfly, the blackfly they like new tender growth.

I'm gonna have to climb up on the bench. Again, Aim, Fire! Eye's shut. Okay, so we got a bit of a little thing there. Now unlike me, I have brought a bucket along. I'm not normally that prepared, but I've been caught out in the past work with all these spiky, thorny offcuts from deadheading roses and tidying up a bit and the dog just clears off them if I'm not careful. That's a worry, isn't it? No one likes a thorn in the dog's mouth.

Right? Oh, my gosh. These loads over here, you see I don't really see it growing behind the palm tree. Okay, you only bought this rose a couple of years ago and didn't really have very high expectations for it because it would be quite a while before it started doing beautiful things.

But actually, it's loving this sunny spot. This is in the Mediterranean bed, sounds very grand. I have explained the Mediterranean bed in the previous episode. Or the pine tree coffin, as we call it. We buried a trunk, an old trunk in it because we couldn't be bothered and couldn't afford to get it ground out properly. We just built around it. Covered it up.

Right, let's go around. Get these off. Get these deadheads off and then I can spray a bit.

This rose is very strong.

Although I have to say I don't find them the most attractive things to grow in the garden unless they are bulking up nicely. They tend to be sticks with roses on the end if they are in a bed. I like a bit more bushiness.

I don't know if you could hear that but Saturday afternoon everyone's got the mower out. Everyone's got their electric device. Hedge trimmings season is coming upon us. Oh, yeah. Now that that's Mike next door. He's, has got a ride on mower. It makes our garden sound really massive. And they are, but the very long and narrow, which does require a lot of mowing. And I love a bit of mowing, and Mike's got a ride-on.

Okay. I mean, that's the most exciting job I've ever done in my life. But it's one of the first things that flowers actually in the garden, gives colour. And so when you're sitting out for your first the first coffee or the first time, it's warm enough to eat lunch outside. Or, you know, I remember that moment of going, Oh, thank gosh, it's warm enough. And then all of a sudden, there's a pink rose behind you, So hey, it's coming. Love summer, right next job.

Advice on greenfly in your garden.