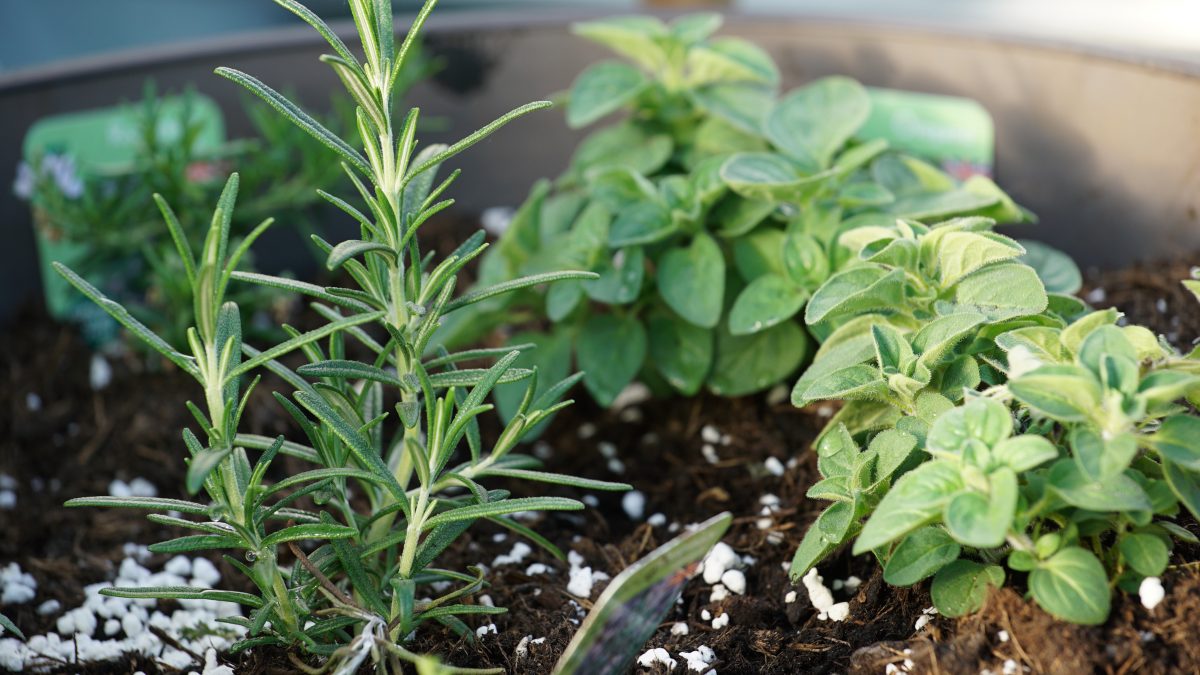 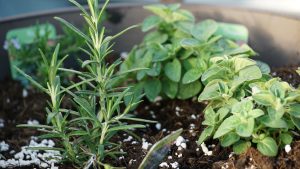 That is the sound of cardboard, it's the sound of a box. It's the sound of live plants being delivered today. The siren was on well, a couple of hours after it arrived, it sat in the hall and I thought I need to get that out into the garden.

It's a box of herbs that I bought last Friday night.

Now, why would you be buying herbs for anything on a Friday night I ask? Well, I was shopping along with Monty Don and I know we've all done it!

We've had a glass of wine and we've been watching Gardener's World. We've gone oh, yeah, I want one of those. I actually got some lovely herbs in here, so let's open up the box and find out what's in here.

I've got a massive, teacups sort of style pot. It's big, quite deep. It's gonna take a lot of compost. Probably nearly all of the bag of compost I've got.

So what have I got? Thyme, oregano, rosemary upright and then rosemary trailing.

And I've also got Cardoon. Now I've got two of those, I don't know what Cardoon is. I'll have to google is again.

Oh, jeez, this is the problem, isn't it with shopping late at night on the internet. Here we go. Oh, this is looking good, it's like Christmas, isn't it? Oh, I've always wanted a sage pineapple thanks! Give it a sniff, oh it does smell pineapply. What would you use it for, "it's an aromatic patio plant, a wonderful pineapple scent, use in cakes." I don't bake!

Anyway, I'm sure it'll attract the bees and maybe my daughter, she bakes. We'll find some sort of amazing pineapple turnover creation. Well, look, we've got straw. Gonna need that in a future episode for strawberries.

I don't have a problem copying Monty's herb garden idea

I've mentioned copying, and I have shopped along with Monty and I have frankly copied all of his ideas with oregano, sage and the like. And have some rosemary in a minute coming out of this box. But it got me thinking about the issue with copying. We don't seem to mind in the garden so we're like, "oh yeh that's a good idea we're going to do that."

But in other walks of life, being confident of work, we worry that we're not original and that we haven't come up with a new idea. And when we failed to come up with a new idea, we beat ourselves up horribly. So think about when you are happy to copy. I'm happy to copy Monty Don because it's tried and tested. He knows what he's doing. He's got the experience I can learn from and what we're about to put into this tea cup-shaped pot is going to be my take on it. My take on it might be that it dies in a few weeks like a lot of and herbs I have worked with, shall we say, over the years!

I think the lesson for me that I have worked out during that chat is to keep on reinventing but in a small way. And reinventing, not inventing it's not necessary. I hope that is sort of useful to a lot of people, actually. I hear that a lot from people going, "oh, I didn't do that because I'm not original, I have an original idea for thought."

Anyway amid the herbs I've entered into motivational speaking mode.

Sorry, right. That's the herbs unwrapped like Christmas Day. Let's get some of this compost into the pot. I don't know if I should do this in an ornamental way, oregano at three o'clock, oregano at nine o'clock in this circular pot. I think if you were cooking and you came out for some oregano, you wouldn't wanna have to faff about, you'd want them in the same place in a kind of bumper opportunity way. So I'm gonna keep the oregano in the same place. So three o'clock and five it is.

Next, this snowdrift thyme is cascading but it's also rather marvellously a bit of a gap filler.

So I think it will range quite nicely, which is what I'd like it to do. I think in the past have been guilty of packing too much in and then we've got our sage pineapple. I've also got some seedlings stuff growing in the greenhouse. So when that's looking a bit healthier, I'll bring that out into this herb garden pot, which is what this is going to be.