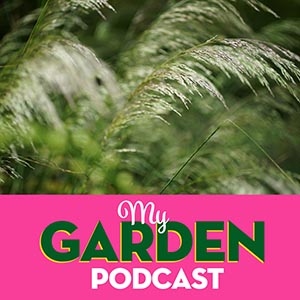 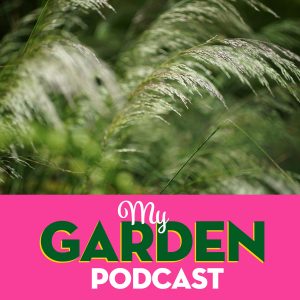 OK, so I'm gonna move those out away, geraniums beautiful pink geraniums still giving it some. But not everything is giving it some. We've reached that time of the year when beauty she begins to fade here on the Mediterranean garden, which you can see on Instagram.

Actually, it's a white built-up bed. Don't tell anyone but it's a load of breeze blocks slathered in plaster and rendering and then painted over so It looks very Mediterranean. In it, we've got a huge tall palm which is growing and growing and growing and looking wonderful. Around it is ornamental grasses.

Now the grasses when they start off in the summer are nothing and now I'd say they're a good metre tall and they've been such beautiful colours. They started off green and then they are kind of vibrant yellow and really good for the movement. A real sort of delicate movement, they just fill visually a big empty space which would be quite ugly otherwise.

I find it's very successful to cut ornamental grasses right back

But I must say they do tend to reach the end of life and I find it's very successful to cut them right back. But what I don't want to do, as much as I like grasses, is to have these grasses going a bit bananas all over the place. So they're getting to the point where they're very dry and any moment now, you see if I just rub them a little bit, the grasses just fall off.

I'm going to cut them back I'm going to probably put them in the green bin for removal rather my own compost. I'm always keen to fill the compost with my stuff, but I'm not gonna do that on this occasion.

You need to get my arms right around, bundle them together and then chop them. So it's going to be quite awkward actually because I've got a microphone in one hand. So I'm gonna use just some basic secateurs to give them a good chop. But I don't want to make too much mess because obviously that all defeat the object and put all the seed everywhere.

So I'm going to gather them low down over a bucket. Put the heads into the bucket, you know like when you're feeling a bit sick and then I'm going to behead them basically, is quite good fun....

Advice on caring for ornamental grasses