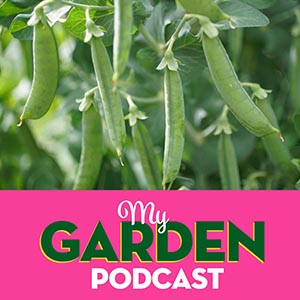 Hello, that's the first look of a pea appearing on my pea shoots.

They went in the ground about six weeks, two months ago.

I was very lucky, I was watching one of the TV shows about gardening. Oh, yeah, why not? Let's say it, Gardeners World, 9 p.m Friday nights in the UK. Best gardening show in the world. And luckily my peas had arrived in the seed packet that day.

I was thinking I'm not sure how to plant these, never done them before. Like most things, and they showed you how to plant them and put them into I'd say a window box size shape of soil and plant them in a zig-zag. Apparently, they need their own private root space.

This is my root space. This is your root space that kind of thing. So I did that like an obedient learner. And then months later, we've got peas and then because you line the window box-shaped area or whatever you've got. She used a drainpipe the Gardeners World presenter. You can slide out the plastic and then slide the soil out of plastic so the formation is maintained. I hope that makes sense? And then you slide it into the ground. You covered up and you put some canes in, and then

you grow your peas up the canes, and then you have baby peas!

So beautiful. It's lovely. Actually, it looks a bit like a sweet pea. Obviously doesn't smell like that. It is going to bear lovely vegetables. I remember being in my PJ's when I was little in the garden on a night like tonight. Really, really late at half past 10 at night with my big sister. And we were out there, and we were in the far end of the garden, where the vegetable patch was and all these lovely peas where being grown next to broad beans, runner beans, spuds. My dad loved growing spuds. We'd just stand there and scoff loads of peas. We would split the pods open and just scoff them. What my parents must have thought when they came to that bit of the veg patch, where there were no peas on the shoots, plenty of spent pods on the ground.

Anyway, that's interesting. It's all like watch and see at the moment, isn't it? Of course, my rocket, my glut of rocket and lettuce, is now seeding, I'll have to takee that out of the ground. I took out a lot of lettuce last week and planted spinach. We use lots of spinach in curries, what else? Certainly, you don't eat it on its own. That's wrong, isn't it?

And then we've got classic carrots, which I thinned out on the weekend. I tried to have one, but they're just still a little bit green in their centre. So that's why we didn't have it on the plate for Sunday roast dinner.

How to grow peas.