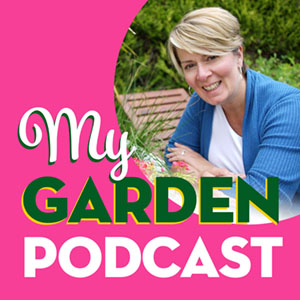 Gardening podcast pyrocanthis. Penny plants a new pyrocanthis hedge and her pets get involved in a garden stand-off.

Listen to another episode

All the episodes in one place

I've just come into the greenhouse because it's a nice cosy place to be, and it's a bit chilly outside. So no other reason I should really be doing this. Maybe in the house but I've got a really large cardboard box that has been delivered with the exciting words on the outside. Fragile live plants.

Now they've been weighing heavily on my mind the last 24 hours since they were delivered because I haven't opened them yet. I haven't had a minute to open them. I've been worrying about them in the dark without any sunshine or water.

I don't know what state they're in, so I'm going to open the box right now and reveal what's inside. The tape is in quality tape. That's annoying, isn't it?

So we got 10 pyrocanthis plants. They grow at about 40 centimetres a year and what I'm hoping they'll do is provide a hedge, low head between us and the neighbours. We got these driveways in front of our 1930's house. It has quite a short driveway. There's no turning circle! There's nothing in between us and the neighbours and to be honest, there's a lot of junk on their driveway, and I'm no into that. I'm not into looking at other people's, you know, piles of stuff.

I think it's nice to have something there, but I didn't want a privet hedge because there's enough of that around and it's a bit boring.

In our first podcast episode from the new season two, we had Andrew from the Lodge garden in Cheshire talking about pyrocanthis, and I looked it up because I like the name.

Turns out it's this gorgeous white flowering prickly hedgerow with red berries all over it, which attract the birds and the bees. And then we have greater harmony in the world.

So let's have a look at these. Oh, they are bigger than 10 centimetres. I'd say that was a nice half metre high. They'll look really scrawny when I first put them in. And that is gonna be a bit of a spiky job. Really massive thorns are sticking out of the plastic.

I want to get these into the ground and start spreading them out. I think you plant them something like 45 centimetres apart, and then they begin to merge. Hopefully and this is my fantasy, then you can sort of trim them into position and create yourself a lovely hedge.

If you're interested in creating a security hedge for your property their thorns are going to deter anyone from hedge hopping or jumping into the garden. Apparently, that's what I read on the Internet. Anyway, I told you didn't come here for expertise.

So, you want to make a move in the garden. It requires a few more moves before you can actually get there. I'm going to remove a big, nice line coloured, vibrant plant, which I'm going to transplant from the front to back garden. I want to say it's like a curry plant she's got that smell about it, with little white flowers on every smell. Lovely. I don't know what it is because I nicked it from someone's garden. I was coming out of the pub one night, I didn't nick the whole thing. I'm not like a thief, but I saw this big plan, and it was the luminosity of it in the night sky as I walked home from the pub was very attractive and appealing, and it smelled really good as well.

So I just nicked a twig of it and I drew a grow cutting from it. My only cutting success and now it's this huge mass of lovely bright lime leaves.

Wow, What's up now? Joey, stop it. No, no. Right. So we've got a massive puffball of a cat in a bed thinking he's protected by plants and a bit of a wall. But no, Joey's just jumped into it like a springer spaniel he is and now they're sniffing each other. Yeah, the cat courts controversy and drama.

He's doing that victim, all puffed up because he claims he's scared, no he loves it. He actually taunts the next the other next-door neighbour's dog by walking across the lawn almost like two claws up to the dog. Just flicking the V's walking by saying come and get me because he knows the dog is actually tethered on a long lead.

So Casper walks by exactly at the chocking point. He then comes running in through the cat flap. It's what they're built isn't it animals? Getting a little adrenaline on.

Anyway, another weekend in the garden. It's nice, isn't it? The weather looks promising, that's what it's all about. I heard some outdoor mowing equipment going on the last few days, which is very exciting. You know, everyone's getting their electric and petrol powered devices out to have a bit of a go of things, which actually is going to be one of my jobs this weekend is mowing the lawn.

Why does it grow over the winter? You think you'd be let off the hook a bit, but no, you have to do a bit of that. Mundane gardening as opposed to exciting gardening, like planting a new pyrocanthis hedge.

So I've finally managed to clear the front bed. Replaced by 10 pyrocanthis plants. I've measured them out. The instructions were a little confusing, but I'm going for 50 centimetres apart to make a hedge. I don't want a big hedge. I just want something to fill in the gaps.

So hopefully the pyrocanthis will do good. It grows, what did I say? About 40 centimetres a year? Not to be sniffed out. It's full sun. Let's put the last one in. There we go. That's a good job that looks absolutely sparse like nothing's happening. But in a few months, hopefully, they'll begin to intertwine.

How to grow pyrocanthis (video)