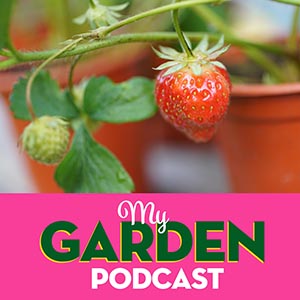 Oh no. I have just been upstairs to get my gardening gear on, it's lunchtime and I've had a conference call blouse on, a pale cream thing.

I thought I'll just nip out, do a lunchtime look around, a bit of deadheading, maybe a bit of planting of something.
I turned my back to get my jeans on to do the gardening and it's absolutely chucking it down.

Right, Well it's not a shower but I am determined not to waste my lunch break because I've got strawberries I need to sort out. I just want to get on with it. There's enough room in the shed, let's go.

We're doing a mad dash down the garden to the shed to get these strawberries into pots.

Okay, so there is a bit of urgency to get these three small strawberry plants into the shed one, two, three and then another three from obviously the other side of the table which means staying out in the rain even longer. Four, five, six and then these big saucers. I say saucers, they are like really big pots but they got wide tops. Like a teacup I suppose would be a better way of describing it.

Brolly down. Oh, I think it's lightening off.

I'm gonna put in three strawberries in each pot.

So one at 12 o'clock, one at four o'clock and on one at eight o'clock around the edge of the circular pot. And the reason for using pots for the strawberries is you can put them in the ground, that's fine but apparently, you have to put straw underneath the fruit so you keep them dry.

When they're in a pot they're lifted off the ground and the fruit can dangle, it looks quite nice as well.

This is my third time lucky with strawberries. This year I have been through quite a lot of pain in strawberry land.

I started with what looked like a very straightforward root sent to me. Twelve strawberry roots sent me by an online gardening company. A reputable gardening firm and I eventually got the roots through. They came packaged up quite nicely with "urgent live plants inside" on the packet.

Now again, it might have been over-watering or under-watering. It was probably the soil I put them in. It was a bit too compacted and I didn't have enough drainage in it.

I don't know. It doesn't seem right that 12 plants wouldn't at least have a bit of a try. So, what I've done is I've bought from the garden centre six established strawberry plants that all look brilliant. And if I cock this up well, I'm just never gonna think about planting or growing strawberries ever again. This is my last chance and strawberries, are you with me or against me? That's basically what it boils down to.

So, let's put them in these gorgeous saucers and the rain has eased off that's nice. I'll nip out to my crockpot which foolishly I have left outside.

Now, I have a bit of a problem here. I don't have enough crocs to cover the bases. I'm absolutely cleaned out of the croc rocks. Um, let's see what I can do.

I'm gonna cover every hole with one bit of croc. Do you know what I've got? When the kids were little we used to take them to the beach do stuff like that. And I think this is universal for all children. They just want to bring as much as they can back from the beach.

Mummy, do like this stone? Oh, darling, it's lovely. Have you noticed the little line in it? Yes mummy it's lovely. Oh, can you put in your pocket mummy? Yeah, sure and you end up laden down leaving the beach carrying the windbreaker, the picnic basket, the rugs the wet towels.

You got some scowling Children because they're hungry and they don't want to leave the beach. Not only have you got all that, but you've also got these pockets of stones and pebbles, beautiful things with so many memories.

Like an idiot, I go the full hog and I actually bring them the whole way home in my suitcase, in the car, whatever mode we're travelling by.

I think I'll use those in the garden they'll look pretty on top of pots. I've now got far too many. So I'm going to do crocs in this pot. Good old fashioned crocs and the other one I'm gonna put a bunch of rocks or a bunch of pebbles off the beach and see what happens. It might be a bit heavy to carry but we'll work on that later.

Right, okay, so there's one pot done. We'll do the other in a minute with the stones. What I'm going to do in here is just put some classic compost in. I'm not gonna bother putting perlite this time because I know this ...

How to actually grow strawberries