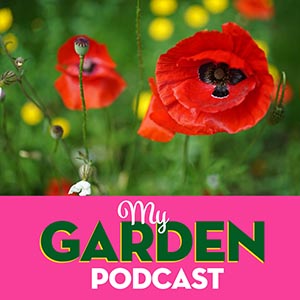 Here's a picture of my wildflowers, I'm really please with them! 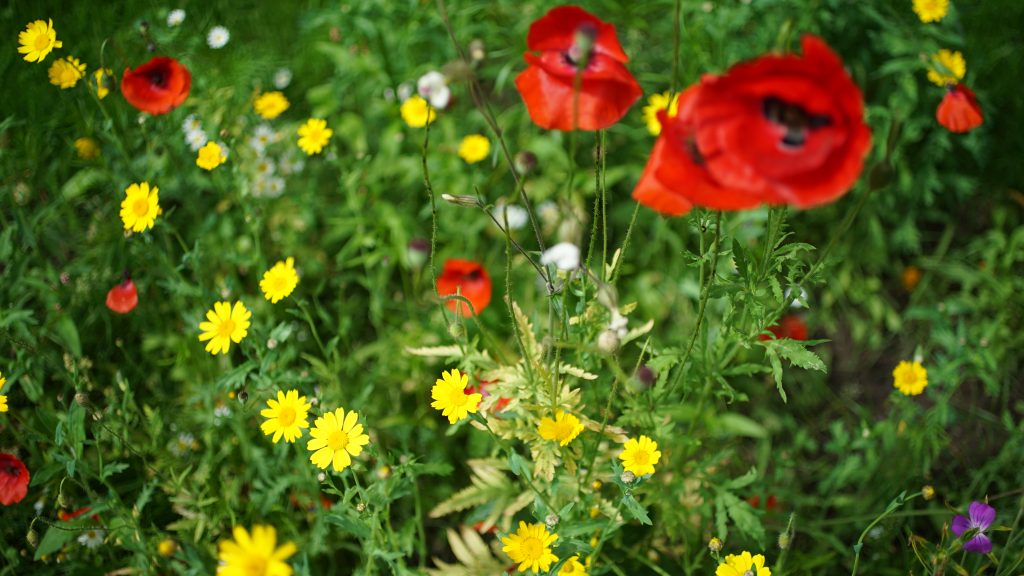 I've had my dinner outside, spaghetti bolognese, it's delicious. I am absolutely knackered, I really am. I had a bit of a rough nights' sleep as you do sometimes. I woke up at three in the morning, you're gonna like this, thinking of apple trees.

Not worrying, just plotting some apple tree strategy. And after trying to count backwards from one hundred I just gave up. I got up and I hit the computer to find out about apple trees. Don't get the impression by the way that this is leading to any sort of apple tree podcast it's just my middle of the night issues.

I'm always Googling, aren't I? I Googled apple trees and found out what sort of apple tree might thrive well in our environment. I tried to order one but you can't order them now. You can only plant them between October November or March and April when they're not growing. (Not expert advice). So we'll do that then and we'll look forward to the following year and get nice cooking apples off the tree. I do like an apple crumble, I'm not gonna lie.

Anyway, so we walked up the garden and It's a 400 ft garden so it's very long, very narrow. There's kind of woodland at the end. I say woodland there are some silver birch trees in an oak tree. But before that, there's a lot of lawn, just a big straight rectangle. If you can imagine a rectangle of lawn that's what we've got.

So we're trying to break it up at the moment and we started near the house making that all nice. Then we decided we would work further up. What we're trying to do is just basically reduce the ratio of lawn to garden.

So we've got a bit more garden but we don't know anything too much like hard work. We're busy, I travel a lot with my work. I'm out and about and frankly gardening in a massive garden like this is a big job. Especially when you've not slept very well.

Anyway, the point is I finished my dinner, thought oh I'm so tired but then you know what, the birds are tweeting the sun is still out, even though it's getting on for nine o'clock at night. And I just started pottering, as you do. I thought I'll just give it a bit of water.

And now I thought I'll come and have a look at the new bit of extracted lawn. So we've stripped up, ripped up, dug up a lot of lawn. You know, like a cricket pitch from wicket to wicket.

That sort of size has been taken out in lawn and about two months ago we planted, not planted sorry sprinkled. No, not even sprinkled. We broadcast our seed. We broadcast a load of wildflower seeds to make a wildflower meadow. Mini-meadow obviously and at the time it was the beginning of the locked down in the UK. It was a really strange time, so many mixed emotions, so much going on. But this seemed like a really good project to get into. Just coming out a couple of hours every day and just digging up some turf which basically took quite a long time. Then ordering the flowers waiting for the seeds to arrive which again took ages. And then broadcasting our seed which I do like saying.

I don't know if that's what you say. Apparently, you broadcast it. Whatever, but anyway, a bucket of seed and a hand full of sand. A couple of handfuls of compost and I sprinkled it all over this new bit of exposed soil.

And then we sat back and waited and of course the global pandemic has been a really super challenging time.

So I decided to call this the corona wildflower meadow of hope.

It wasn't looking very good at one point until very recently because it was all looking like just grass was growing. I thought we've been sold a dud packet of seeds.

And interestingly, the end third of it where we couldn't reach with the hose pipe is the bit that's doing the best. It's really odd maybe it gets more sunshine? I don't know but it's got poppies. It's got daisy sort of looking stuff. It's got yellow stuff.

Do you know what I'd have to dig the packet out again to tell you what was in it? It has a good variety and I'm hoping to get some sort of bees over to the garden.

Anyone know any bees that want to come over and play?

But apparently, it does take a couple of years to get established. So that's why the first two thirds where we could reach with the hosepipe, where we tended it a little bit better. Kept it moist, looked after it, isn't doing that great. Weird, the same packet of seeds, same bag of seeds. There's just one soul orange poppy emerging in the end. But the other top end is fantastic.

Who knows what it will be like. But I have got a friend who expected me to be sending her photographs any time now of me skipping through the meadow. She got it in her mind that it was going to be this big meadow I'd skip through it in slo-mo to her delight but that hasn't transpired...

How to care for a wildflower garden