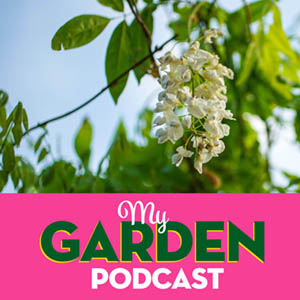 Gardening podcast wisteria - Wisteria hysteria. In this gardening podcast, Penny's wisteria needs a trim, so she throws caution to the wind and climbs a ladder with a selection of sharp tools.

What a difference a few weeks makes, it's freezing. It's really cold I've got a coat on. I'm a bit cold so I'm gonna get into doing stuff to keep warm. It's the last day of August and I'm a bit late to the party.

I may be a bit 11th hour with cutting my wisteria back so it can be less whippy.

You've got to cut the whips off apparently in August according to gardening experts, of which I am not one.

So anyway, I'm squeaking in at the 11th hour to cut my whips off. But first of all, I'm going to thread more of the wisteria along the top of the summerhouse. So we've got these kinds of jutting out sticks, beams, joists I don't know what they are. They stick out the front and I've got a bit of wiring in between them that's encouraged the wisteria to grow along it to make a sort of porch.

A topper if you like and also looking great in the spring when the flowers dangle down. That's the idea, I'm going for that kind of New Orleans look. Wisteria growing along with the flowers dangling down.

Anyway, Joey (the dog) can you leave that, please?

On one side of the summerhouse, I've put a winter flowering clematis which is flowered in the summer. It's bucked the trend. It's done some weird stuff.

All right Joey, don't! You can have that yes you can drink that. He's just drinking random buckets of rainwater. It's his favourite.

Anyway, the winter-flowering clematis to left the summer house on the side is lovely. It's great but it's weird. It looks kind of Jurassic, I mean its trunk does. It's like strings of wood combined together and clustered.

It looks dead but a-top is a fan shape of trellis and on it is this green clematis which has got beautiful big blowsy white flowers on it and yet it looks like it's coming from a dead thing. The point of telling you that is that Joey was eating the dead thing because obviously, it looks like a stick doesn't it?

I am going to tackle the wisteria so this is a ladder's job, you know not being tall on that! So, I was going to go up.

I've got a sharp object in one hand on and a slightly wobbly ladder situation underneath. Let's see what happens.

No Joey. I'm sorry no! I took my gloves off threw them down and there we go a springer spaniel bouncing over to collect them. No! Not for you! I'll put them in my pocket.

Right, how is this gonna work? Let's see if we have to call the ambulance. Yep, Stable enough, don't try this at home.

So the sharp objects I have got is probably unnecessary right now. It's hedge trimmers so I'm gonna put those down. Safety first or second?

And then I'm going to try and grab some of these whips to train the wisteria over and under.

Over and under these wires. Now the problem I have slightly with it is, I do have to train it quite regularly. That's because it's growing away from the sun. So it's instinct is to grow the other way. But if I could just use its own growth to lace it in and out I'll be winning.

I feel quite unsafe I have to say. It doesn't help that it's slightly raining as well. What's this doing? It's growing back on itself because it wants to grow back towards the sunshine. Don't we all!

So the issue I have is that the steps on the ladder are slightly slippy. Am I bringing enough jeopardy to the episode? I hope so because that's exciting, isn't it? Is she gonna fall? Is she gonna break her neck?

Now we're also got to get this tucked under because the doors of the summer house open and every time they catch the wisteria stuff ends up on your head. So we need a nice tidy underneath. Who doesn't?

It's really good getting these lovely long whips, very satisfying just tucking and pushing them into the branches and then just weaving them.

Also, to add to the jeopardy I've put in my pocket some rose secateurs for such moments. I do tend to catastrophise a little bit...

How to prune wisteria